In view of the uncertainties surrounding the current health crisis on the island and the world, we are cancelling our 39th Annual Mac-A-Thon, which was scheduled for Saturday, April 11th, 2020.

We value your enthusiastic support over the years and are offering to refund your entry fee. However, we ask that you kindly consider donating your entry fee to Keōua Hōnaunau Canoe Club so we can continue to fulfill our mission: the perpetuation of outrigger canoeing, promotion of Hawaiian culture, environmental awareness and protection of historic Hōnaunau Bay.

We’re offering two options for those who have already registered:

You can make a FULL DONATION in support of the mission of Keōua Hōnaunau Canoe Club and choose to donate your entry fee to the club.

You can request a FULL REFUND if you cannot make a donation at this time.

Please send REFUND requests to contact@keouacanoeclub.com
No need to reply if you’re making a donation.

Mahalo nui loa for your continued support and malama kekahi i kekahi!

Posted on February 23, 2020 by Ana Currie
Posted in Uncategorized | Leave a comment

Here are some photos of the paddlers at yesterday’s Uncle Louis Kelekolio Memorial Race in Hōnaunau, courtesy of Jeremy Chien. https://drive.google.com/open?id=17dtnzjVtBrUKBDm9KXYAhOZpiBa5Evfq

Our annual General Membership Meeting and Potluck is scheduled for Sunday, November 24that 1PM.

As we enter the season of Makahiki, the traditional Hawaiian celebration of the harvest and a time of spiritual and cultural renewal; the Keōua membership prepares for the coming paddling season by selecting a new Board of Directors to manage its affairs and ensure the responsible stewardship of Hōnaunau Bay, while competing in outrigger canoe racing.

Keōua Hōnaunau Canoe Club seeks to recruit and maintain on its Board of Directors outstanding members whose talents and commitment to the mission and traditions of the Club will enhance the paddling experience for our membership and contribute to our ongoing stewardship of Honaunau Bay and the surrounding areas.

Serving on any 501(c)3 Board of Directors entails a number of responsibilities that ensure the efficient operation of the organization and its activities. At Keōua Hōnaunau Canoe Club, the Board is responsible for all financial and legal management, as well as oversight of all Club operations and equipment maintenance.

Board members are expected to:

We welcome members interested in serving on our board to submit their nomination for consideration. Following is the list of our current directors and candidates for our 2020 Board of Directors:

Pulses of the Land: Wahi Pana of Ke’ei I & II

Aloha ā mahalo to all the paddlers and supporters who came together on Saturday, March 3rd  for the Uncle Louis Kelekolio Memorial canoe race! Under clear blue skies and on relatively calm seas, more than 75 canoes raced 6 and 10 miles to Ke‘ei and to Keawekāheka Point then back to Hōnaunau Bay. Co-sponsored by HIPA and Ola Brew, this race marks the beginning of Keōua’s 2019 paddling season and is an opportunity to line up and compete with some of the best paddlers on the island. It also brings us together to work as a team in hosting and welcoming our Moku o Keawe paddling ‘ohana to historic Hōnaunau Bay.

The post-race festivities featured nahenahe music by the Ke‘ei Mauka Boyz, honoring our recently departed Aunty Diana Aki, Marlis Tanoai, and Derek Young. Our amazing kitchen volunteers worked their legendary magic and prepared a delicious pa‘ina with kalua pig & cabbage, rice, stir-fried ‘ulu, pumpkin lu‘au soup, tofu poke, vegetarian chili, green salad, and various desserts. Our locally based Ola Brewery provided us with a keg of their refreshing IPA to wash it all down, followed by individual awards created by our friends at Stoneface Hawai‘i.

More than just an athletic event, a canoe race embodies the spirit of Aloha and Laulima, with the entire ‘ohana, young & old, helping to put it together and participating in every aspect, enlisting the kokua of friends, manning the race registration and timing, obtaining escort boats, gathering & preparing food, setting up and decorating the venue, and anything else necessary to ensure that everyone involved has a great time. We are truly blessed and grateful for all your positive energy and contributions to the perpetuation of our cultural traditions.

Long and short course race results are listed below

The 32nd Annual Calvin Kelekolio Long Distance Outrigger Race challenged men, women and mixed crews from all around the Big Island with hot and relatively flat conditions in one of the most beautiful courses in the paddling series. Results are as followed:

The short course was 8 miles from Honaunau into Napo’opo’o and back to Honaunau, and included the women, juniors, and mixed crews. The keiki junior division was a 4 mile race from Honaunau, past Moinui point, and back.

Then long course was over 11 miles from Honaunau, into Napo’opo’o, and out to the northern side of Kealakekua Bay, then back to Honaunau, and was paddled by men’s crews. 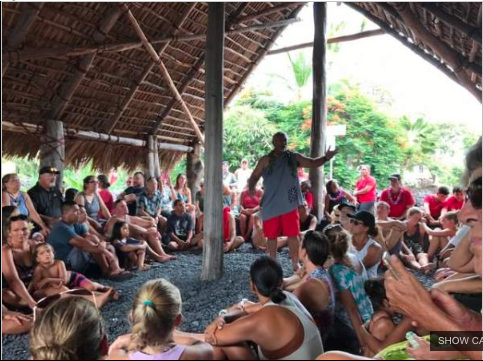 On July 30, more than 150 people gathered at Honaunau Bay for a traditional Hawaiian blessing of the newly restored Hale o Ho’oponopono. The attendees included many community volunteers who had worked on the building project, community members from the surrounding area and numerous kupuna who had been connected with the hale in the early days of its history.

The rebuilding of this significant South Kona cultural site was sponsored by the Keoua Honaunau Canoe Club and funded with a grant from the Administration for Native Americans (ANA). In addition to perpetuating the ancient art and culture of Hawaiian outrigger canoe paddling as traditionally practiced on historic Honaunau Bay, the canoe club seeks to promote awareness of Hawaiian culture and its preservation and perpetuation.Their youth program seeks especially to assure that the cultural knowledge is passed on to those who will preserve it for the future.

The Hale o Ho’oponopono, which translates to “house of making things right, bringing things into balance, healing” was constructed in the mid-1970s as part of the creation of a school of the same name.

The school had been established to fill the need of many Hawaiian children who had a difficult time relating to the education process as presented by the local public schools.

The students went fishing and opihi, or Hawaiian limpet, picking and were taught canoe maintenance, paddling and stewardship principles, along with a Hawaiian language curriculum.

The school’s traditional hale halawai, built by school staff and students, served as the center for many of these activities, which had a significant positive impact on the lives of many young Hawaiians coming of age in the 1970s.

The building project has been a long time coming, noted Rafael Ramirez, a member of Keoua Honaunau Canoe Club for 42 years and its current president and head coach. The school at Honaunau Bay closed in 1995 and the hale gradually fell into disrepair. The concept of rebuilding the hale had been discussed at the canoe club for more than 20 years, and when a grant application written by a club member was approved by ANA in 2015, the long-awaited project could finally begin.

The process of rebuilding the hale was accomplished over a two-year period with a small core team of experienced and new hale builder haumana — interns — assisted by a cadre of community volunteers who participated in the seven hale building workshops that took place over the course of the project.

The hale building process was led by one of the most experienced practitioners in the state, master hale builder Walter Wong. Uncle Waltah, as he is known, orchestrated the project from start to finish, which was built according to Hawaii County’s building code for traditional and indigenous structures.

Puna Kihoi, who officiated the hale blessing, was a teacher at Hale o Hooponopono in the 1980s. One of the hale builder haumana, Randal Kahele, was one of her students at the school and their reunion at the blessing ceremony was an emotional reconnection for both.

The hale will be used for educational and ceremonial purposes and will serve to strengthen the cultural landscape of Honaunau Bay ­— a visible, enduring reminder of the significant and sacred nature of this place. 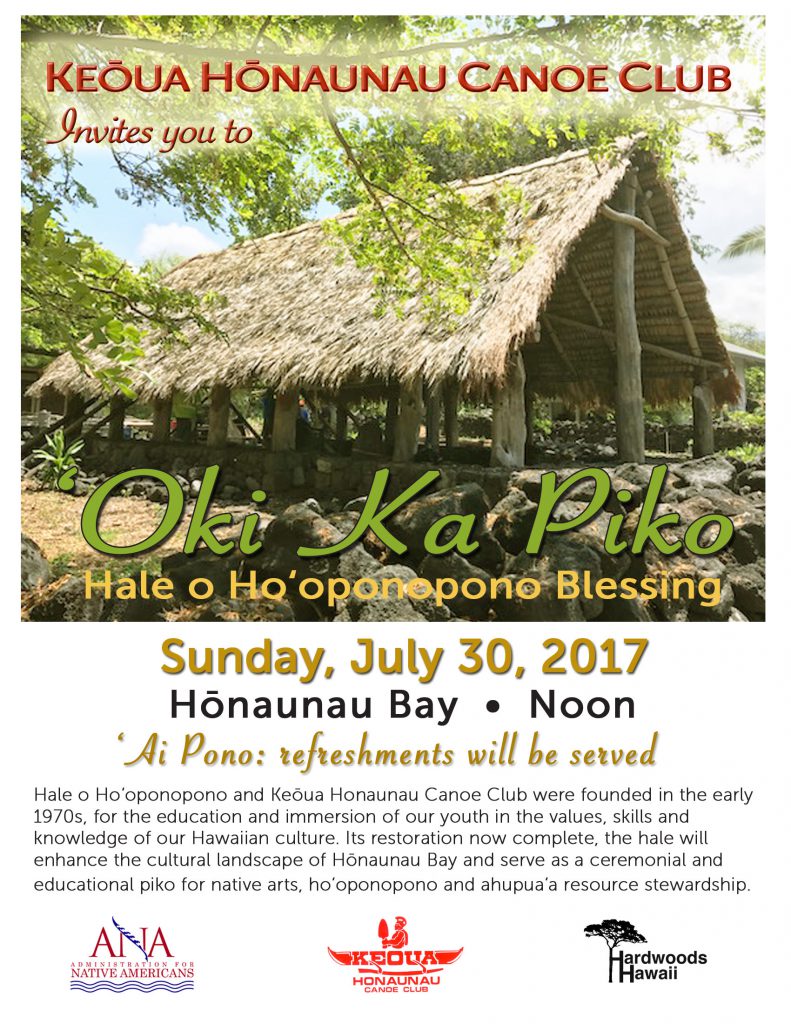