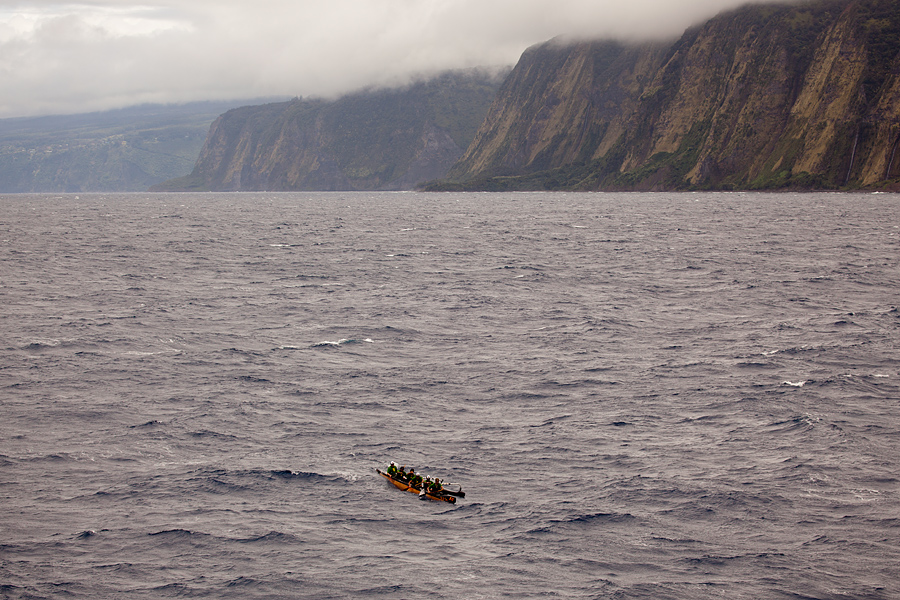 The distinguishing feature of the Olamau race is that it is designed for “unlimited” canoes, which have no restrictions on design, length or weight – in contrast to the races sanctioned by the Hawai‘i Canoe Racing Association, which require canoes to be of traditional design and weigh at least 400 pounds.

The unlimited canoes used in the Olamau Race were half that weight, around 200 pounds. The lighter boats make it possible to push the limits with race distances, making a 100-mile race actually possible.

The nineteen crews – 14 men’s crews and 5 wahine crews – that competed in all three days of the race launched from Laupahoehoe Point north of Hilo and paddled 38 miles to Keokea Beach, past Waipio, Waimanu and all the stunningly beautiful and inaccessible valleys on Hawai‘i Island’s north coast. The second day’s race ran 27 miles from Keokea to Kawaihae and paddlers fought big surf and swells most of the way, with some canoes swamping not long after the race start.

On the third day, the unlimited crews doing all three legs of the race were joined by six  additional crews who entered to race the last day’s 36-mile run from Kawaihae to Kailua-Kona – the Uluweuweu Relay.

All race crews had 12 members each, and the first two days were iron races with six paddlers going the whole distance with no crew changes. On the last day, all crews were allowed one change at Kukio, the approximate half-way point.

Some of the crews competing only in the last day’s race used traditional canoes.

Keoua members Justin Udovch and Ananda Missler were on the unlimited “Surf Park” crew, made up of Hawai‘i Island paddlers who trained together for months before the race. They raced all three days and finished 11th with an overall time of 12 hours, 44 minutes and 10 seconds. 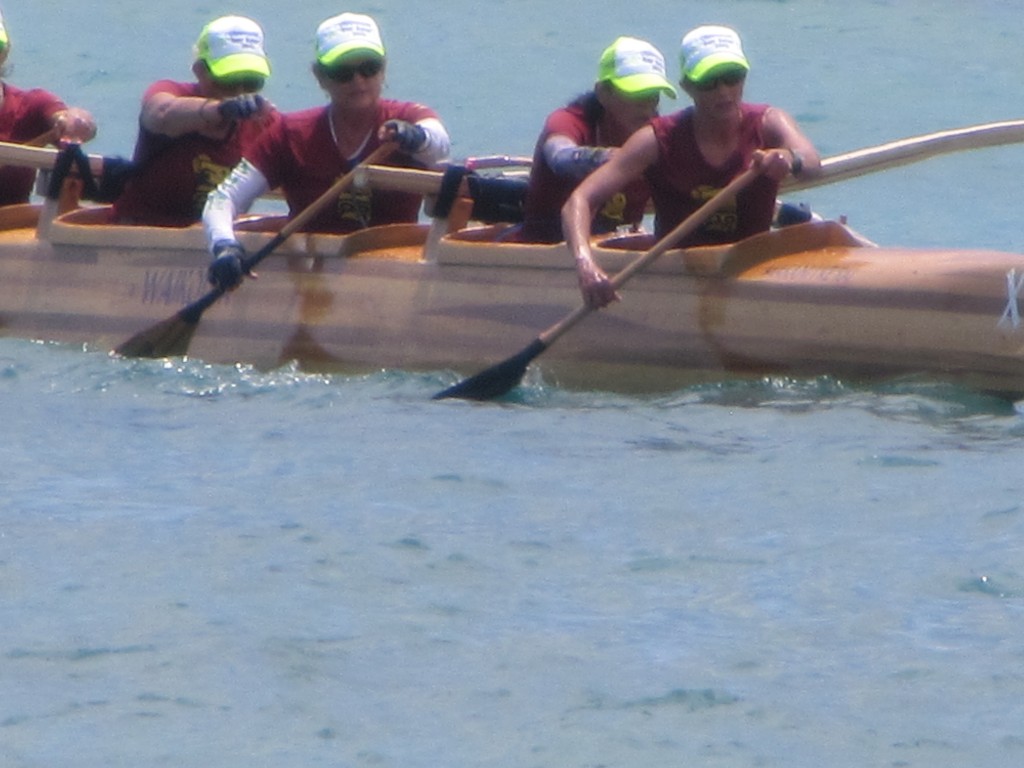 “The race leg I paddled, from Kawaihae to Kukio, was not that much longer than the Queen Lili‘uokalani Race, but it was much harder,” reported Carroll. “We battled wind and currents most of the way. But what an experience! I’m so glad we did it.”

While most of the unlimited crews were younger paddlers, the Keauhou Kupuna Boys represented the other end of the spectrum. Ranging from 60 to 74 years, these long-time Hawai‘i Island paddlers were determined to be part of this landmark extreme event.

“These are our waters and participation was our way of welcoming the innovations taking place in the paddling world,” says Ramirez. “We look forward to building our own unlimited canoe soon.” 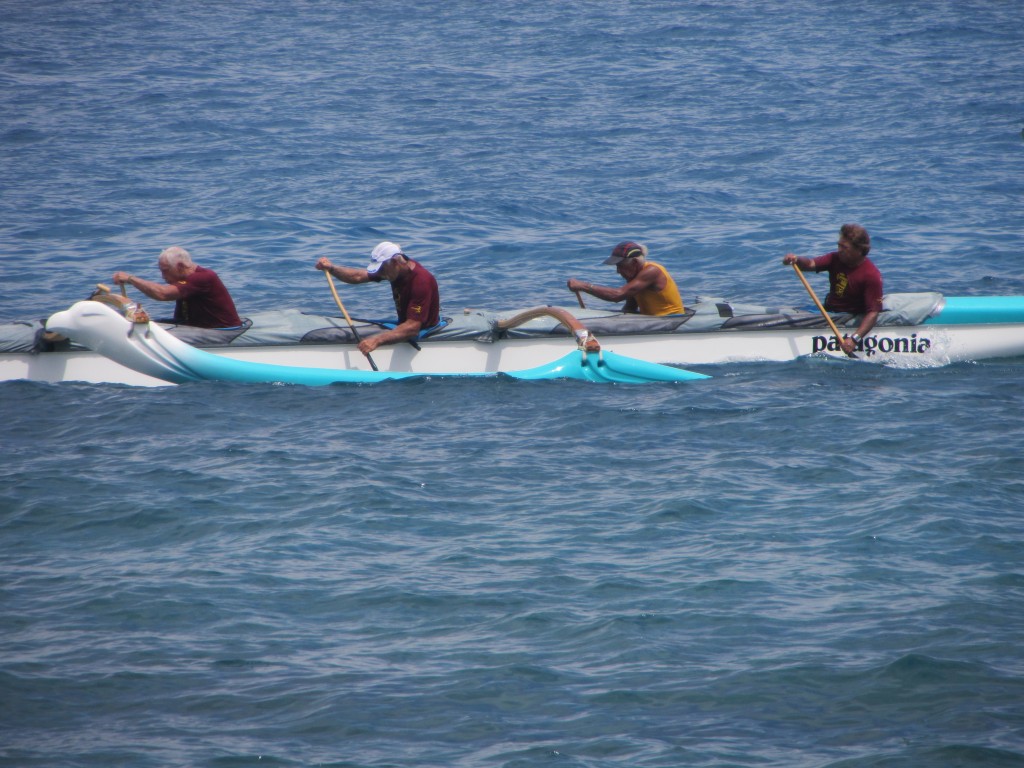 The Keauhou Kupuna Boys, with Rafael Ramirez in yellow, approach the finish line at Kamakahonu Beach in Kailua-Kona.

The Olamau was conceived as Hawaii’s answer to Tahiti’s iconic Hawaiki Nui Va‘a, which departs from the village of Fare on the island of Huahine and finishes with a flourish at Matira Beach on Bora-Bora. Attracting 86 crews from around the Pacific in 2012, the Hawaiki Nui’s insane intensity and gorgeous race course has set the bar very high for multi-day canoe races.

The first Olamau, in 2011, started on Maui and involved major channel crossings. The course ran from Maliko Bay to Fleming Beach Park on the first day, Fleming to Kaunakakai on Molokai on the second day and then from Kaluakoi, Molokai to Waikiki, Oahu.

The race’s shift to Hawai‘i Island created an unparalleled opportunity for our island’s most motivated paddlers.

“I’m very grateful to have been able to compete this year,” says Udovch. “It was quite an epic climax of racing after months of anticipation and training. It’s very inspiring to compete with the best in the world and to see and be proud that Hawaiians are closing the gap on the Tahitian stronghold in canoe paddling.” 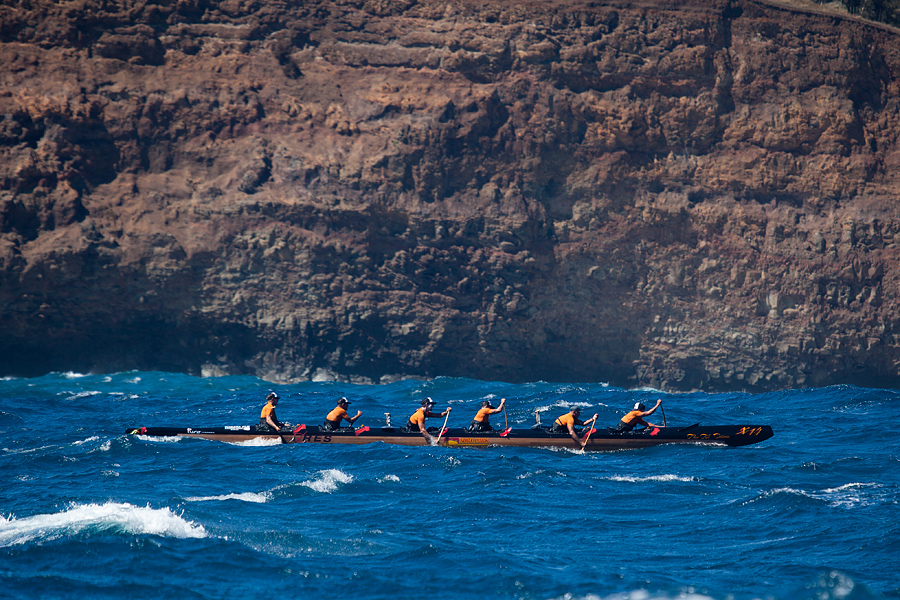 Surf Park with Justin Udvoch in 3 and Ananda Missler in 4, on the Day 2 paddle from Keokea to Kawaihae.

The paddlers who competed in Olamau are excited that the 2014 race will again be held on Hawai‘i Island and feel that this confirms the success of the event and solidifies the future of unlimited canoes in Hawai‘i.

Udvoch agrees.  “I’m thrilled they’ve already announced that next year’s race will be here,” he says. “I think the race celebrates innovation in canoe design as much – if not more than – the committed paddlers who participate and compete in this event. A friend of mine who I paddled with in New Zealand has since moved to Oahu and become one of the top paddlers over there. He and his crew built their own boat in Hawaii Kai in their backyard and came over and raced it. This has to deepen the connection between paddler and canoe, which I think is great. This race enables that.”

The Tahitian team Shell Va‘a, also winner of Hawaii’s Molokai Hoe race for the past seven years in a row, came in first all three days of the Olamau race, earning them $22,500 in prize money out of the $50,000 purse, and the continued respect of the paddling world.

This entry was posted in Events, News. Bookmark the permalink.