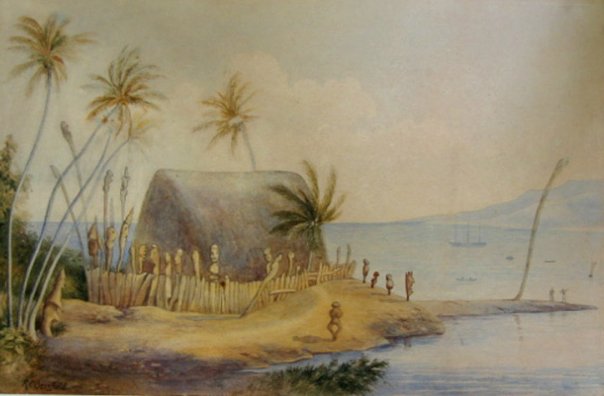 At that time, it served as a royal mausoleum, housing the remains of deified high chiefs, whose powerful mana, which lived on with the remains, served to sanctify the Pu‘uhonua.

In 1829 Queen Ka‘ahumanu ordered the removal of the remaining bones and the complete deconstruction of the temple. The platform itself survived until high surf, including at least two tsunamis in 1868 and 1877, caused extensive damage.

Restored in 1966–1967, with additional restoration work done most recently in 2004, the Hale O Keawe and the carved wooden ki‘i that surround it stand as testament to the cultural and spiritual significance of the site. As we paddle our canoes past Hale O Keawe, the juxtaposition of this prominent image of ancient Hawai‘i, and our daily, modern practice of the culture of the wa’a, serves to inspire and encourage our efforts to honor and perpetuate the cultural legacy of Honaunau.

To help tell the story of Hale O Keawe, we looked to the writings of John Papa ʻĪʻI, a 19th century educator, politician and historian and subject of the Kingdom of Hawaii. He became an attendant of Kamehameha I and  a companion and personal attendant to Liholiho, who later became King Kamehameha II. He also served as the general superintendent of Oahu schools, a member of the Treasury Board and the Board of Land Commissioners, and Speaker of the House of Nobles. His series of 1866–1870 articles in the Hawaiian Language Newspaper Ka Nupepa Ku‘ooko‘a were translated and re-published in 1959 and have provided invaluable insights into Hawaiian culture during a period of great significance in the Hawaiian Kingdom.

In his words, “The Hale O Keawe in Honaunau was called Ka-iki-ʻAlealea (The little ʻAlealea,) and was a puʻuhonua. Kaikiholu and Pakaʻalana on Hawaii, Kakaʻe in ʻIao, Maui; Kūkaniloko in Wahiawa, Oʻahu; and Holoholoku in Wailua, Kauaʻi, were also places to which one who had killed could run swiftly and be saved.”

“The person whose writing this is often went about them, including the Hale O Keawe. He has seen this house (hale ʻaumakua iwi) where the bones were deposited, standing majestically on the left (or south) side of Akahipapa.”

“The house stood by the entrance of a wooden enclosure, with door facing inland towards the farming lands of South Kona.”

“The heir to the kingdom entered the Hale O Keawe during his journey around to the various luakini heiau of Kanoa in Hilo, Wahaʻula in Puna, and Punaluʻu in Kaʻū. The journey began in Kailua, thence to Kawaihae and from there on around the island to the Hale O Keawe.“

“The appearance of the house was good. Its posts and rafters were of kauila wood, and it was said that this kind of timber was found in the upland of Napu’u. It was well built, with crossed stems of dried ti leaves, for that was the kind of thatching used.”

“The appearance inside and outside of the house was good to look at. The compact bundles of bones (pukuʻi iwi) that were deified (hoʻokuaʻia) were in a row there in the house, beginning with Keawe’s near the right side of the door by which one went in and out, and going to the spot opposite the door (kuʻono).”

“At the right front corner of the house where the unwrapped bones of those who had died in war, heaped up like firewood. In that pile of bones were the bones of Nahiolea, father of M Kekūanāoʻa. The person whose writing this is saw his own father remove his tapa shoulder covering and place it on a bundle among the other bundles of bones. He must have asked the caretaker about all of them and their names, and they were told to him. That was why he did so.”

“When the writer saw his father doing this he asked, ‘Have we a near kinsman in this house?’ His father assented. There are some people who have relatives in this house of ‘life’, but perhaps most of them are dead. The chiefs were descended from Hāloa and so were their retainers (kauwa kupono). The chiefs were born, such as Lono-i-ka-makahiki and Kama-lala-walu and so on down, and so were the retainers (i.e., the junior members of the family.)”

“After the chief ʻIolani (Liholiho) had finished his visit to the house, a pig was cooked and the gathering sat to worship (hoʻomana) the deified persons there. When that was done, the chief and those who went in with him ate together. After the eating was over, the kapu was removed. The travellers left the Hale O Keawe and sailed by canoe, landing at Kamakahonu in Kailua in the evening. There they met Kamehameha. That must have been in the year 1817.”

This entry was posted in History. Bookmark the permalink.