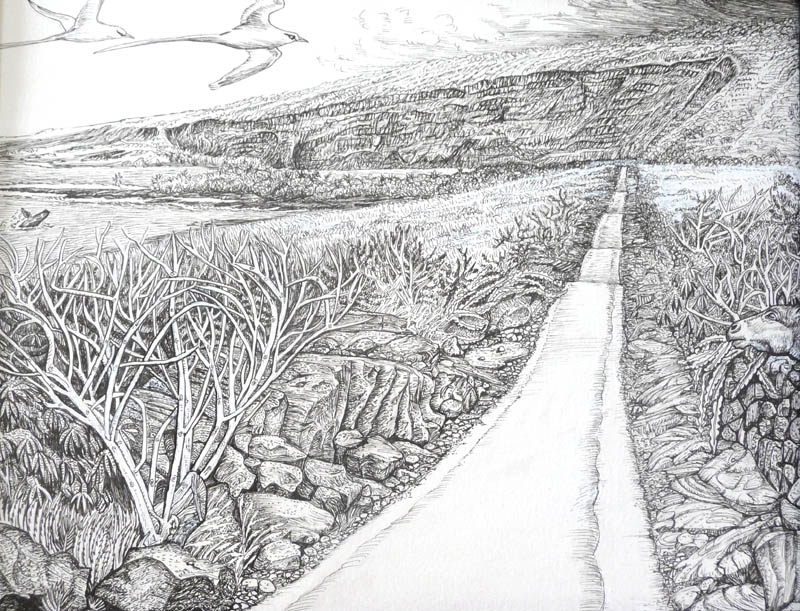 The coastal areas of the four ahupua‘a between Hōnaunau and Napo‘opo‘o are home to a unique and precious array of cultural, historical and natural resources.

Between the significant cultural sites of Pu‘uhonua o Hōnaunau to the south and the Hikiau Heiau to the north lies the site of the Battle of Moku‘ohai, fought in 1782, which was a key battle in the early days of Kamehameha I’s effort to conquer the Hawaiian Islands. Here, the opposing armies of Kamehameha and his cousin Kiwalao skirmished for seven bloody days, with victory going to Kamehameha when Kiwalao was slain on the 8th day. Many of the fallen warriors were buried on the battlefield so this area is dotted with burial platforms, surviving the ravages of time, grazing cattle and invasive vegetation.

Linking the two ancient coastal communities is a system of well-trodden ancient pathways that are now part of the Ala Kahakai National Historic Trail. Several mauka-makai trails are also currently being restored by dedicated volunteers. The two sheltered bays – Hōnaunau and Kealakekua – and the pristine waters along the coast that connect them were bountiful sites for the practice of lawai‘a, traditional fishing.

Forming a curving, protective arm embracing the waters of Kealakekua Bay, the 600-ft. tall cliff is known as Pali Kapu o Keōua, the sacred cliff of Keoua. Here is where the bones of Keōua Kalanikupuapa‘ikalaninui Ahilapalapa, the father of Kamehameha I, were laid to rest after his death in the mid-1700s. At the northwest base of the cliff lay the village of Ka‘awaloa, where Capt. Cook met his fate in 1779, while Hikiau Heiau sits at the end of the road in the village of Napo‘opo‘o.

Keoua Hōnaunau Canoe Club is proud to host its Annual Mac-A-Thon 5K and 10K race on the road between Hōnaunau and Napo’opo’o. We hope to instill appreciation and respect for this beautiful and significant cultural landscape for the benefit of future generations.

This entry was posted in Events, History. Bookmark the permalink.