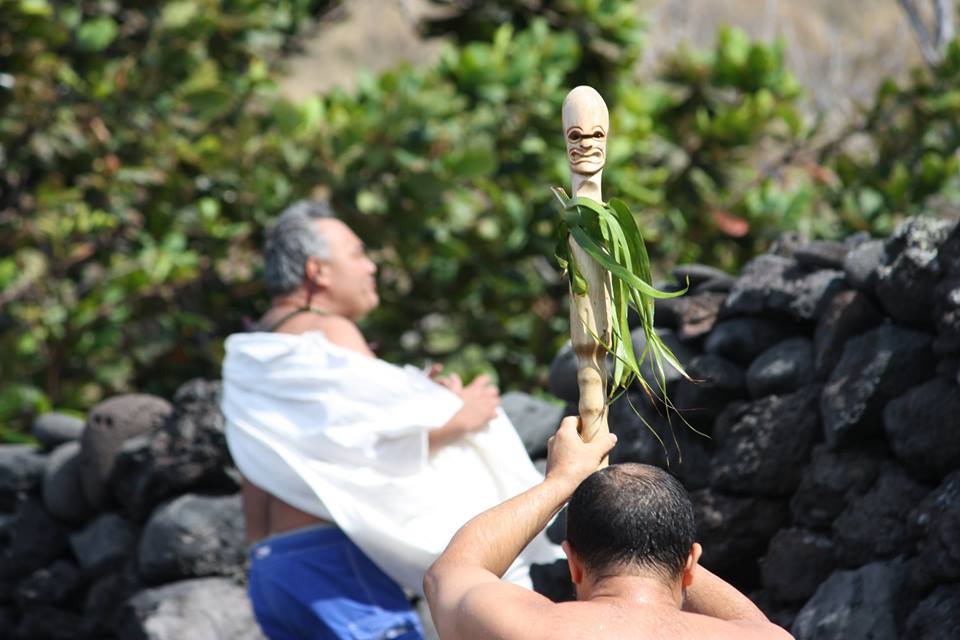 This past weekend, Keoua Honaunau Canoe Club was deeply honored to be part of a profound and historic event in honor of the coming of Makahiki, which begins today.

Makahiki, a four-month observance dedicated to Lono, the deity of agriculture, rain and fertility, is an ancient Hawaiian tradition that has been slowly brought to life again over the past two decades. Beginning in November on the first new moon after the constellation Makali‘i (the Pleaides) becomes visible on the horizon, Makahiki was set aside as a time to celebrate the harvest and play competitive games and sports. It was also a time of reflection and spiritual cleansing. The people and the ‘aina rested and re-energized.

For many Kanaka Maoli and others living in Hawai‘i, this is our time of “Thanksgiving,” rather than the U.S. continental concept based on a convoluted tale about Pilgrims and Indians.

The first Makahiki activities to make a re-appearance in more recent times were the Makahiki games. Serving in ancient times as a way for warriors to stay fit, these games also taught young people to develop skills, speed and quick thinking. Today, many schools and groups have organized annual events focusing on Makahiki games.

Also concurrent with the Makahiki of ancient times was a reverent ceremonial procession around the island, as the chiefs surveyed their lands and received tribute from the people. A ceremonial staff carved with a depiction of Lono was carried from each ahupua‘a to the next, and protocols were performed honoring the chief and the god Lono.

On Hawai‘i Island, residents and visitors observed something a bit unusual going on around our island this past weekend – groups of runners, one carrying a ceremonial carved akua (deity), others following with Hawaiian flags and banners.

This modern portrayal of the ancient Makahiki procession is the Makahiki Pule ‘Aina Holo, a ceremonial relay run circulating the Island of Hawaiʻi following the ancient practice. According to organizer Lanakila Mangauil, “this holo is to give our time, energy, sweat, body, and hā (breath) to lift the consciousness of all towards healing and reminds us to malama our āina and ourselves. It is to reconnect us to our kuleana (responsibility) to malama our kino (body/self) so we can malama our ‘ohana (family), our lahui and our ‘āina.”

After months of grassroots planning, this modern interpretation of the traditional island circumnavigation began in Honoka‘a before dawn last Thursday. Oli (chants) and pule (prayer) were offered, and the carved Lonoikamakahiki staff, adorned with a kapa cloak, was presented.

With the dawn, a new awakening in the hearts and minds of the people of Hawai‘i Island was set in motion.

Members of the Pitt River Nation from California, with a tradition of long-distance running to carry the message of the sacredness of all life, our relationship to all living species, and of the need to maintain the delicate balance that exists between humankind and our Mother Earth, joined Native Hawaiians in this historic event.

Lonoikamakahiki was carried by relay, from one group of runners to the next, through the towns along the highway to Hilo, then climbing until reaching Kilauea Volcano, where the first day’s travels ended at Na Makani Paio campground. On Friday the runners continued past Pahala, Punalu‘u, and Na‘alehu, rounded Waiohinu and ended in Miloli‘i, the “last fishing village in Hawai‘i Nei.” There, they were welcomed by the villagers and members of Pa‘a Pono Miloli’i with traditional chants, hula and a delicious meal to restore their energy and spirit, before retiring for the night.

On Saturday, in the stillness before dawn in Miloli‘i, Lonoikamakahiki boarded a canoe and traveled, with an escort of a second canoe from Miloli’i Canoe Club, north to Ho‘okena, where he was met by three canoes from Keoua Honaunau Canoe Club. All five canoes then traveled together up the coast to Kealakekua Bay, stopping to pay homage in front of Hale o Keawe and ‘Ale‘ale‘a Heiau in Honaunau and offering ho‘okupu at Hiki‘au Heiau in Napo‘opo‘o.

The meeting of the canoes at Ho’okena was itself a historic occasion. The previous weekend, Miloli’i Canoe Club had been officially re-born and celebrated with an ocean festival event that included traditional protocols, paddling races and a joyful pa‘ina. Keoua Canoe Club was especially thrilled at the formation, after many decades, of a new canoe club in Miloli‘i to serve the many children and adults living in this isolated village and its neighboring ahupua‘a– and at the same time strengthening the culture of the wa‘a in Kona Hema (South Kona). As the paddlers in the canoes paddled towards each other, whoops of joy carried across the sparkling morning waters, while youngsters on the shore at Kealia sounded the pu in honor of the occasion.

From Hiki‘au Heiau, Lonoikamakahiki took to the road again, traveling north through Kailua-Kona and reaching Pu‘ukohola Heiau by nightfall. On Sunday, the Holo relay runners continued to Hawi, then through Waimea back to Honoka‘a for closing ceremonies.

All who participated in this sacred and historic journey were blessed with the essence of its healing and uplifting intentions. May the spirit of giving and sharing fill our hearts and guide our thoughts and deeds always. 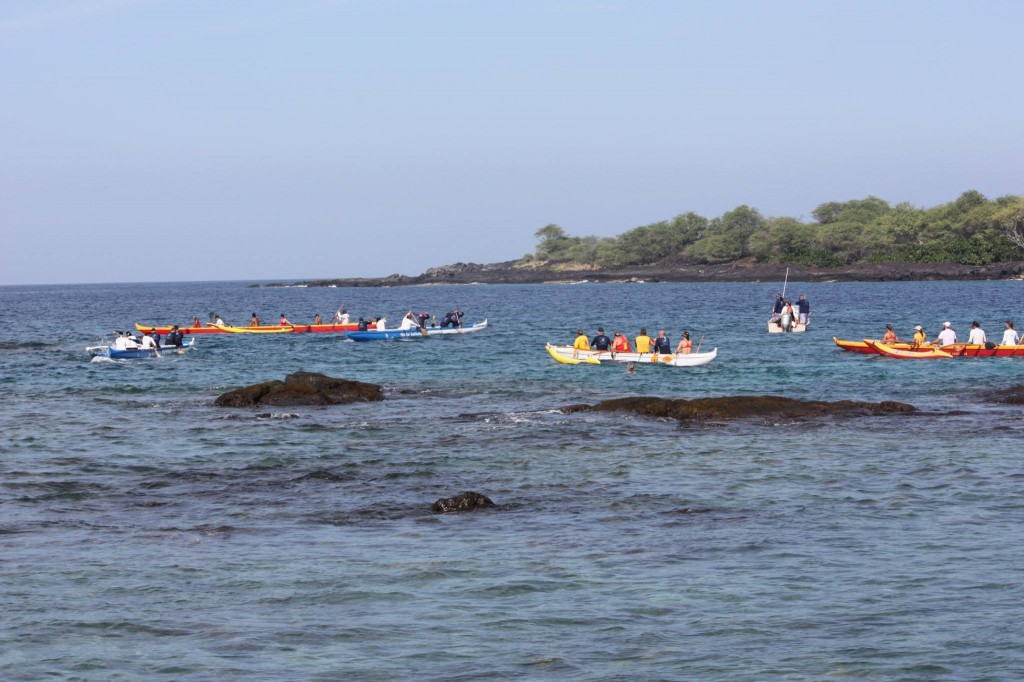 Lonoikamakahiki arrives in Kealakekua Bay. Some of these paddlers paddled the entire 27 miles from Miloli‘i.

This entry was posted in Uncategorized. Bookmark the permalink.